The Altador Cup VIII's NC event is the Fanatic's Museum. It seems the Techo Fanatics collection of AC items has grown to large and now he is letting other fans in to get some of his treasures! Isn't that nice of him?

The event is pretty much the same as the AC VIP passes from the previous years. There are four passes that will give you access to certain area's of the Fanatic's Museum: Scholar's retreat, Make Some Noise Hall, Yooyu Gardens and The Winning Look. There will also be a special Collector's Corner Flashback Pass, that will give you certain re-releases of previous AC NC Events.

Tickets
For this NC event, there will be four tickets available. Tickets costs 700NC each and can be bought at the NC Mall (or you could trade for one or be gifted one).

The first ticket, the Altador Cup NC VIP Lounge Pass was released at June 3rd and is for sale through June 30th. The others will be released later on.

Participating
Once you've gotten the ticket, you'll go to your inventory to activate it. You active it by clicking on the pass, then choose the option 'Activate Pass': 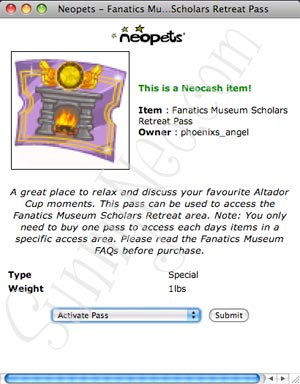 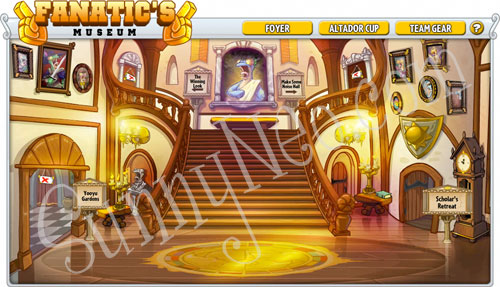 Just ike like last year's Altador Cup NC event, the VIP Pass, you don't have to play games for this event. Since you won't be earning any neopoints for this event, you can play it on side accounts as well.

However, there is a catch! In order to play the Fanatic's Museum Room event you need to join a team for the Altador Cup. This means you will get a sign-up bonus. (Or more, if your side is a previous main on which you played the AC before). You must discard these items and not play any of the AC games on your side account in order to keep your account safe.

TNT gave the reply below in regards to this matter:

For signing-up with a team, you will also get 150 free NC. At the moment, it is not know if you are allowed to keep this when joining on a side account, so we advice you not to spend this until more is know about this.

When you activate your first Fanatic's Museum Pass, you'll be given a sign-up bonus. This bonus consists of three wearable items: a facepaint, a wig and Trousers and Cleats. 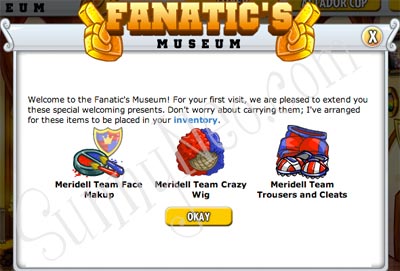 These items will all be in the matching colours of the team you signed up for.

To get your daily prize, visit the room for which you have an unlocked pass. If there is a new item availible, which will be the case every day, it will show up with a question mark. Click on the question mark to claim your prize. 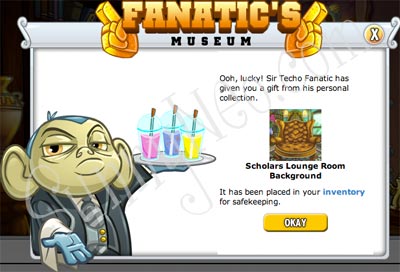 Make Some Noise Hall
The Winning Look started giving out items on June 16th. There are seven items to collect

Yooyu Gardens
The Yooyu Gardens started giving out items on June 23th. There are seven items to collect.

Can I access the Fanatic's Museum on side accounts?
Yes you can, but there's a catch! In order to do this, you will need to join an Altador Cup team, and joining an Altador Cup team will automatically give you NP items on your side, which is against the rules. We are aware of this! We are willing to make an exception if you discard the NP items you receive and do not participate in any of the Altador Cup games. (Similar to if you accidently did a daily on a side. Delete the earnings and no harm done.) If you do this, then Fanatic's Museum participation on sides is fine.
And, we promise to fix this next year so it's not an issue. Sorry about that!

Can I activate multiple passes for the same museum area?
No. You will only be able to activate and collect prizes once for each museum area per account.

How long will the Fanatic's Museum run?
The first museum pass allowing access to the Scholars Retreat will go on sale June 2nd. A new access pass will go on sale each Sunday except for the Collector's Corner Flashback Pass which will be available starting Tuesday, June 4th. You can purchase and activate your passes until June 30th. You may claim your prizes on already purchased and activated passes anytime you visit an access area.

I activated a museum pass, why didn't I get my bonus items?
In order to receive your 3 team specific bonus items you must sign up for a team. Altador Cup Team sign-ups end on June 28th. If you have not joined a team by June 28th, you will no longer be able to receive your team bonus items.

Is there a bonus prize for participating in Fanatic's Museum?
Yes. For activating your first pass (no matter the order), you will receive 3 bonus items corresponding to the Altador Cup team you have signed up for. In order to receive your team bonus items you must sign up for a team by June 28th. If you have not joined a team by then, you will no longer be able to receive your bonus items.

It's not allowing me to activate my museum pass. What should I do?
In order to activate your first pass, you must be signed up with a team for the Altador Cup. In terms of activating other passes, you may only activate one of each pass type per account. Please keep in mind you can purchase and activate your passes until June 30th.

What is Fanatic's Museum and how does it work?
The Techo fanatic has collected so much Altador Cup memorabilia over the years that he's decided to share some of it with you. Sure, it's just to make room for more stuff, but it's still a nice gesture.
To participate, you'll need one of four museum access passes or a special fifth "Flashback" pass. A new pass goes on sale every Sunday throughout the Altador Cup starting on June 2nd. Visit the NC Mall to get your pass, activate it, and then visit a special area inside the fanatic's mansion every day that week to find a new NC item waiting for you.
And don't forget to join a team in the Altador Cup! That's the only way to get three team-themed bonus items when activating your pass. ;)

When can I start collecting Fanatic Museum prizes?
Prizes for each area can begin to be collected each Sunday. You will be able to claim one prize per day. If you missed collecting any days you can always return to the access area and claim those prizes.

Where do I purchase Fanatic Museum Passes?
Each week a new access pass will be put on sale in the NC Mall Altador Cup Shop. You can purchase passes there.

Why isn't the pass I want available in the NC Mall?
Check back at the NC Mall each Sunday for a new museum pass. The only exception to this is the Collector's Corner Flashback Pass which is available starting Tuesday, June 4th. Already released passes will remain for sale until the end of the event.