On 8th October 2010 Neopets launched a new area of the Haunted Woods, made especially for Halloween. This was the Haunted Faire. 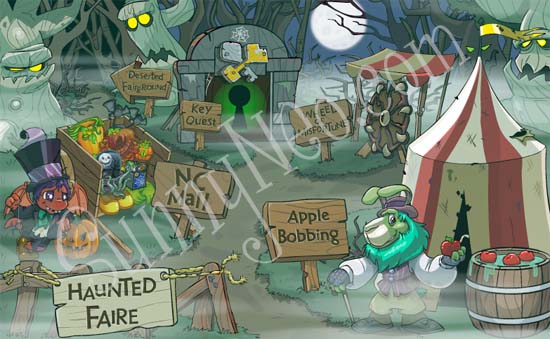 Some features of the Haunted Faire are already known activities, like the Wheel of Misfortune, Keyquest and the NC Mall. However, on 12th October a new feature appeared: Apple Bobbing!

Apple Bobbing is a new activity you can do once a day. It is hosted by Vandebart Biggsby, a mysterious Green Gnorbu. To start apple bobbing, click on "Bob for Apples". 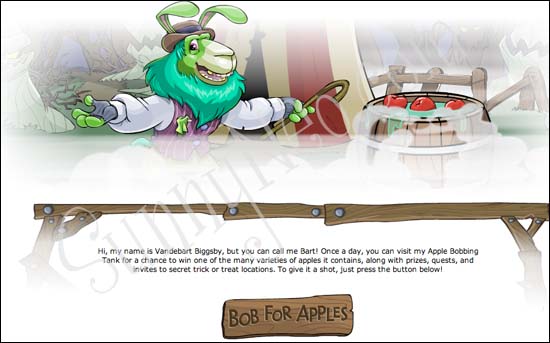 Now the Gnorbu will give you either an item or a quest. Items given can include apples and spooky foods. If you receive an item, you're done for the day. Come back tomorrow and try again!

There are several kinds of quests, each has a different result. If you are given a quest, you must complete it before the end of the day it was given.

The trick or treat bags can have a variety of things inside. You may receive one or more of the following items:

In addition to the above items, a few new items have been found in the bags. Some of the items listed below are searchable but have not yet been spotted in Neopia.

A few items were released in the bags unintentionally. Very few were released, and TNT staff later stated by neomail that they intended to remove the items and replace them with other items. Clearly the capes have been created for some other purpose which is currently unknown.


- Thanks to ummagine3284 for giving us this info.