Battledome Claws are items you can equip to your Neopet for the Battledome. When you use them in battle, they will give out an exclusive NC item. Each kind of Battledome Claw will come with it's own set of items, which have a certain theme. The Faerie Element Battledome Claw for instance comes with 6 different Faerie element items, while the Ultra Pink Battledome Claw gives out 6 different kinds of pink items. Which item you will get out of the 6 available items is random. You might also get multiples of the same item if you use more than 1 Claw.

Battledome Claws are NOT weapons, nor do they allow you to steal an item from your opponent. All they do is give you a special wearable NC item. TNT said about this in the editorial:


☼ Okay, so I know the Faerie Element Battledome Claw allows us to take Neocash items from our opponent in the one-player challenge battles, but is it possible now for opponents to steal items from us? If so, would it be best to remove customization from a Neopet that we intend to use for battle? Please remove my username, thank you. ~username removed
Faerie Element Battledome Claws do not work that way! No one can "steal" NC items from your Neopets in the Battledome. When you battle, you are rewarded with a specific Neocash wearable; it's not literally "stolen" from anyone, so no need to panic!

This is question 8308, archived from Editorial Issue 571.


Please select a Battledome Claw to see the information and prizes for it.


Using a Battledome Claw
To use a Battledome Claw, you'll have to equip it to your Neopet first. You do so by going to the Neopet Status page. There you choose the Neopet you want to battle with by clicking on it and it's stats and weapons will show up. 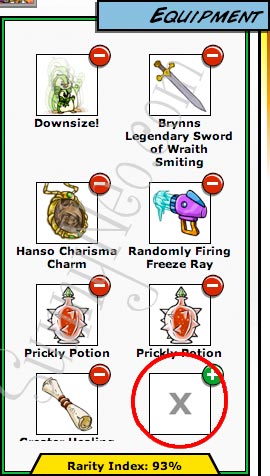 You must have an empty spot in your weapon equipment to use the Battledome Claw. Click on the green '+' icon to add an item.
(If you do not have any empty spots, you will have to remove an item first using the '-' icon.) 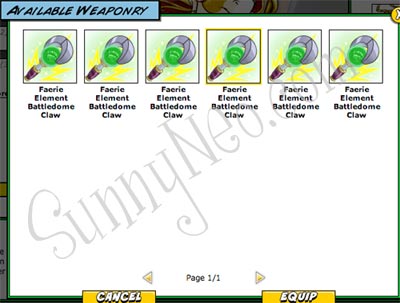 Click on the Battledome Claw, then choose the option 'Equip'.

Now that you have equipped the Battledome Claw, it's time to fight. You do so by clicking on the 'Battle' sign in the battledome, that will take you to the page where you can choose your Neopet. Here, you click on 'continue' to choose your opponent. For a Battledome Claw, 1-players challengers are the fastest and easiest way to go, so choose that option and click again on 'continue'.

Now choose your challenger. If you need to, you can look at our Battledome Challenger page for easy challengers and how to get them. Once you've chosen your challenger and its difficulty (by clicking on either the green, yellow or red icon), click on 'Battle' to start a battle.

In battle, you now choose your weapons, by clicking on the tiny icons in the left corner that have been circled in the picture. 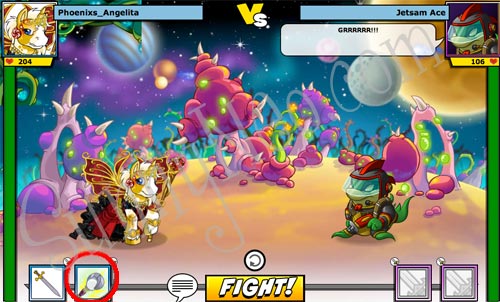 If you want to use a Battledome Claw, make sure the Claw is one of the weapons you select. Once you've done so, click on 'Fight'.

If you click on your combat log (the button for this is at the very bottom of the page), you will see the following description when using a Battledome Claw: "You use your Battledome Claw and acquire a nifty wearable NC item."

Now a message will pop-up, telling you you've gotten an item:

The item will now be in your inventory and your Battledome Claw has disappeared.

You can equip up to eight Battledome Claws at one time and use more than one Claw, or all of them, for that matter, during one battle.

It is also possible to use two Battledome Claws at the same time. When you do so, you will only get a message about one of your prizes, but both prizes will show up in your inventory.

How do I use the Battledome Claw?
Equip a Battledome Claw to your Neopet before going into battle. On your move, choose to use the Claw and fight! An exclusive NC item will automatically be "stolen" from your opponent and placed in your inventory.

Will the Battledome Claw give me an advantage in battle?
There is no stat advantage to using the Claw in battle. You will get a random NC item, "stolen" from your opponent.

How many times can I use my Claw in battle?
Each Claw can be used once. It will disappear and you'll get an NC item in return. You can equip as many Claws as you have free slots, though you might want to take at least one attack weapon in with you to defend yourself.(This does not steal NC items from 2-player challengers.)

Are there different Battledome Claws?
We will be releasing different Claws that award different exclusive NC items.