What is Food Club?
Food Club is a betting establishment located in the corner of Warf Wharf in Krawk Island, as seen on the map below. 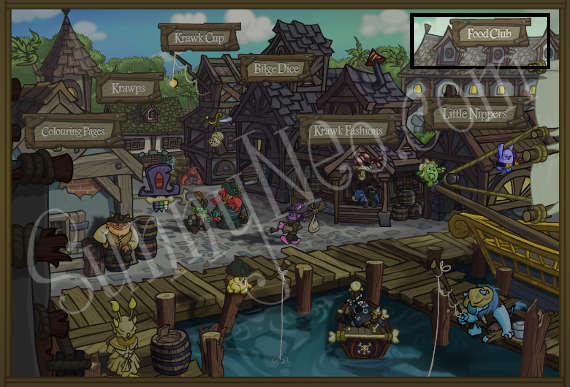 Once a day, at 2pm NST, there is a match in which pirates compete to win. There are 5 arenas with 4 pirates in each arena. Choose the correct winner for each arena, and you could win big!

On average, you're looking at winning twice as much as you bet. Know that on any given day, you risk losing however much you bet - which for the older players, can be over 100k. However, on the long run, it's guaranteed that you'll come out in the positives. It make take a few days of betting, but you'll make up for whatever you lose on a given day. On average, expect to make twice as much (say, in a given month) as you bet. By the time you've spent a million neopoints, you should have earned 2 million back - giving you a net profit of 1 million neopoints. That doesn't mean, however, that you won't have days with losses.


Navigating the Food Club
When you first get to the Food Club, the pages can seem overwhelming. Each link below provides an explanation of what can be found on that page and how useful it is overall.


Pirates
There are 20 pirates who compete every day in Food Club, as listed on the first page you see when you arrive at the club (and shown below).

The initial table lists each pirate's name, strength, weight, wins, losses, and % (the percentage that corresponds to how often he wins). As seen in the graph below, a pirate's strength is related to how well he performs in each round; however, a pirate's weight has little to do with his performance.

Clicking on a pirate's name will take you to a page that lists information regarding that pirate. Shown below is the info for Scurvy Dan the Blade.


The box has a sentence about the pirate, and then lists his strength, weight, favourites, allergies, wins, and losses. This is all the same information as seen on the first page, with the exception of the favourites and allergies. If a pirate is eating something he likes, he's likely to do better in that round; if he's eating something he's allergic to, he's more likely to do poorly. In the "Making Your Own Bets" section at the end of this guide, you will see that favourites and allergies come into consideration when calculating the food adjustment for a pirate.

The table below lists the favourites and allergies of each pirate, in order of win percentage, as promised above.


Courses
The Courses page lists all of the foods that are served in Food Club. Clicking on the name of a food will take you to a new page that lists the categories the food is in, as seen in the picture below.

This way, you can figure out if a food that a pirate is eating in that round is a favourite of his or something he's allergic to. All of the foods and their categories are listed below.


Place a Bet
This is the first page of importance to new players, because it's where you'll be going to place a bet. The first thing you see is a Kacheek who greets you and says, "You can only place up to ---- NeoPoints per bet, which is 50 + 2 for every day you have been playing Neopets (---- days)." This limits how much you can win, unfortunately, but it gives older players a well-deserved advantage.
Below that, you see a table listing five arenas, as shown below.


Select a pirate from the drop-down menu. Next to each pirate, there are two numbers - for example, 13:1 as in the case of Peg Leg Percival in the image below. This tells you how likely the pirate is to win, with a 2:1 odd being the most likely and a 13:1 odd being the least likely. It also tells you by what factor your bet will be multiplied in your winnings. If you bet 1000NP on Peg Leg with 13:1 odds and he wins, you win a total of 13000NP!