What is the Hidden Tower?
The Hidden Tower is a tower in Faerieland in which Fyora the Faerie Queen sells her rare and powerful artefacts to Neopia's elite. The word elite is appropriate because it's no use going there unless you're rich, most of her items cost millions and millions. So if you're planning on buying something there, be prepared to save up a lot of money first.

In 2010 a new feature was introduced at the Hidden Tower: Loyal User Perks. Every third Wednesday of the month there is 3% discount for users with accounts older than 60 months old.

In 2014 a new random event was introduced to the site. If you are lucky enough to get it, you will receive 10% off your next purchase at the hidden tower. This will not stack with the 3% loyal user discount, and does not appear to expire until you use it.


Where is the Hidden Tower?
You will notice that the Hidden Tower is hard to find, hence its namesake. You cannot see the Hidden Tower on the Faerie City map, but it is there, you just need to know where to look to find it. On the image below you can see the exact location. 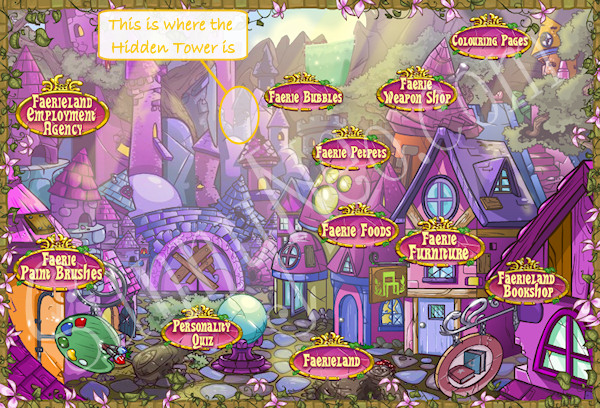 There is of course also a quick URL to the Hidden Tower:
https://www.neopets.com/faerieland/hiddentower938.phtml


Related Avatars:
The hidden tower also has some related avatars you can get.


Fyora's sayings:
When you visit the Hidden Tower, Fyora will talk to you. There are different things Fyora can say to you. Below you can see all the options, some of them are rather funny.

What does it sell?
A long time ago, when people thought about the Hidden Tower, they automatically associated it with weapons. Not just weapons, but the strongest, the most powerful and the most expensive weapons in Neopia. Back then, nearly all items Fyora sold in the Hidden Tower were weapons.

Not too long ago Fyora decided to start selling other things in the Hidden Tower as well. Paint Brushes, Faerie Dolls, Dubloons, Trading Cards and even Plushies! Right now the Hidden Tower sells a variety of rare and expensive items.