On October 17th, 2012 the Battledome officially closed down for a complete revamp. Read more at the Neopets FAQ page.

On October 26th the Closed Beta Testing opened. A small amount of people are able to look at the Battledome, try it out and test it. We at SunnyNeo got ourselves some testing spots because we are an officially Recommended Fan Site. We are using these Beta Spots to give everyone who did not get chosen some insights in the new Battledome. On this page you can see an overview of the new features.
Update: On November 9th the Closed Beta Testing ended, and the Battledome Beta was opened for everyone.


Notable changes
The new battledome looks very different (and much better!) from the old one graphic wise, but there are many other differences when it comes to battling as well. We've listed the most notable ones here:

There also appears to be a new battledome related random event, giving you a weapon to fight with;


Screenshots
The best way to give you some insights in the new battledome is by showing you some screenshots taken at it.

The Domes
There are eight diffent domes where you can battle, all on different places in Neopia and they all look like the place where they come from. The Cosmic Dome is only accessible by neopets Premium members. The domes are:

Below are screenshots of how these areas look like when you're battling there:

Prizes
At the moment, beta-testers are recieving item prizes after each battle, next to the neopoint reward that was already given out. You will ramdomly recieve one, two or three prizes after winning. There are many different prizes, and we are not sure if these will saty this way or will be changed later on once bate-testing is over, but we thought it was nice to give you an idea of what you can get right now.

Some prizes, like the codestones, are common for all areas, but other areas will have themed prizes. This means the food you will get Pango Palladium is tropic food, the food in Rattling Cauldron will be spooky food. There are also themed prizes for most of the challengers. The pant devil is likely to give you pant devil related items, whereas Edna might give you witchcraft ingredients. Not all prizes listed below can be obtained from any challenger.

We have moved the prizes to their own page. They were getting awfully large. Sorry for any confusion.


How to Withdraw 2-Player
Withdrawing from a Neopet vs Neopet battle is a little bit different. Here you have three scenarios.

Scenario 1:
Two users have decided that they no longer want to battle. No moves have been sent in the Battledome yet. Either of them may go to the Challenges page to withdraw. The pop up will explain that since there were no moves made in the fight that neither player will receive a penalty.

Scenario 2:
One user has sent a move, and the other user wishes to withdraw. If the user who has not sent a move clicks the withdraw button, the pop up will explain that the fight is waiting for their move. If they withdraw now, they will receive a penalty(a loss). The user who sent a move will not.

Scenario 3:
A user has accepted a challenge and made their first move. The only problem is: the other user is no longer online or is away from the computer. Since the user has sent a move, it will tell them that they cannot withdraw from the battle until 30 minutes of inactivity have passed. Once 30 minutes has elapsed with no additional moves made, they may now withdraw from the battle. The pop up will tell them that the fight will be ended with no penalty to either player.


Tutorial
The tutorial below is actually written by TNT, but since it gives a lot of insights we've decided to post it here as well.

So, maybe you're new to the Battledome, or simply unfamiliar with its recent makeover. Luckily for you, there's a spiffy tutorial to get you up to speed in five easy steps!


STEP 1: Arm Yourself!
Actually, you'll be arming your Neopet! It's not a good idea to go into battle empty-handed, so it's best to equip a few weapons first. Which weapons should you use? Where can you purchase them? Well, that all depends.

If you're a Neopian newbie, there is some free equipment in your Starter Pack you can use to prepare your Neopet for the Battledome.

For more experienced Neopians, there are many weapon shops around Neopia that can supply you with various pieces of equipment.

More serious 'Domers may want to compare stats and find the most bang for your buck. There's always the Battlepedia, but also some very helpful Fan Sites out there to aid in your search.

However you obtained it, once you have your equipment in your inventory, you can either click on it there and select the "Equip NEOPETNAME" option in the pop-up, or you can visit the Stats page here in the Battledome (found on the navigation bar above) and equip from there.

Once equipped, you're ready to go lookin' for a fight!

STEP 2: Start a Fight
To get into a fight, find a "Battle!" button! There's one on the main Battledome page and one on (almost) every page in the Battledome navigation bar. This will allow you to set up a fight.

From there, you choose which Neopet you'd like to take into battle, and then select your opponent! You can choose to fight a challenger (a "computer-controlled" opponent) or a 2-player fight (against another Neopian). 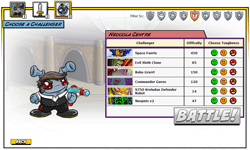 Browse through the opponents you've unlocked and, once you've decided whom you'll be fighting, select a Toughness for that challenger.

The Average toughness corresponds to the difficulty number listed in the column to the left, next to that opponent's name. The lower the number, the easier the challenger. From there, each toughness gets, well, tougher. Choose wisely!

There are two options for 2-player fights. You can choose to send a challenge directly to another Neopian, or you can wait for a Skirmish. Follow the instructions on each page to find an opponent using these methods.

NOTE: During the beta, only other players in the beta can accept challenges and Skirmish wait times may be longer than normal!

Once you've found an opponent, the game is on!

STEP 3: Battle It Out
When you see the "VS" screen, there's no turning back! Click the button at the bottom to enter the battle and prepare for Round 1. 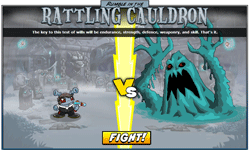 The battle screen has a few different components to keep track of, but don't worry. You'll get the hang of things soon enough! Here's a breakdown: 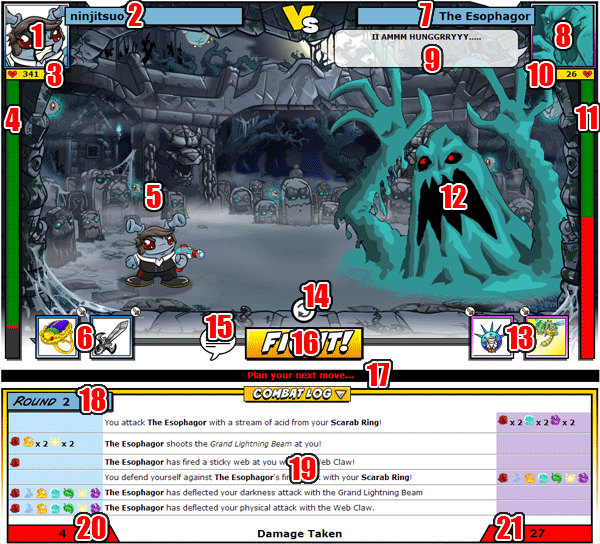 As you battle various opponents, you'll get more familiar with this screen and how to use all the bits and bobs. For now, let's stick with the basics!

Every round, you'll need to plan your move. (Your opponent will do the same!) To do this, click on each equipment slot (#6 in the diagram) to select a weapon you'd like to use from the menu. These are what you'll use to damage your opponent and you can select up to two weapons per round.

Then click "FIGHT!" (#16 in the diagram) to send your move and see how you fared. The fight will play out, showing your Neopet's moves and your opponent's moves and how much damage, healing, blocking, etc. was done by each. You can also look at the health bars to see how things panned out.

Evaluate what happened, plan another move, and keep fighting until someone wins! (Hopefully you.)

STEP 4: The Aftermath
After the fight ends, and you've collected your prizes for winning or cursed your fate for losing, it's time to recuperate. If your Neopet lost any Hit Points during the battle, you can visit the Healing Springs to get back into fighting shape, or you can buy some healing potions or neggs from your fellow Neopians for faster healing.

While your Neopet recovers, you can spend the time looking for weapon upgrades, asking for advice on the Battledome Neoboard, or training for your next bout.

When your Neopet is ready, you can head into battle again to prove your might!

STEP 5: Become a Battledome Master
It takes planning, strategy, and even a bit of luck to be great in the Battledome. Your Neopet will need to train hard at the training schools around Neopia to become stronger. You'll need to save your Neopoints to buy upgrades for your weapons and equipment. And you'll need to practice against the toughest of challengers to gain experience on the battlefield. However, earning Neopoints and loot, and even besting your Neofriend's high score make it all worthwhile

Or maybe you just like punching people IN THE FACE.