While your pet and Kell where busy working on the right Melody, Corin tracked the monster underground, to the Neovian Catacombs.
After gathering some more information about the catacombs from Baffington the Kacheek, you, together with Kell and Corbin, make your way into the Neovian underground. You start the puzzle by clicking on the 'The Perilous Catacombs' button at the end of the page.

Whenever you choose the wrong action, you will be hit by a curse. Some of these will hinder your progress while others are actually quite helpful.

How some curses look
There are a couple of curses that will affect your map: 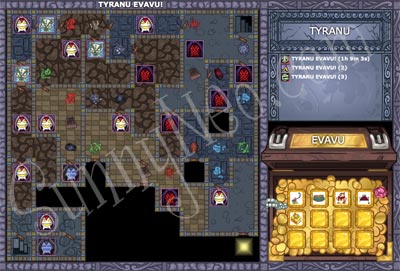 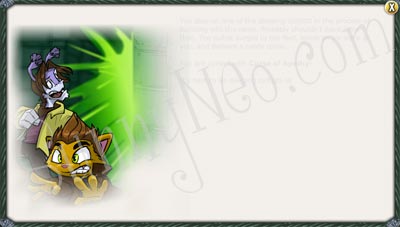 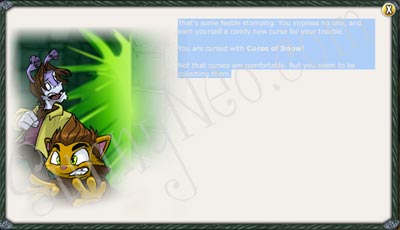 Curse of Snow (with text selected) 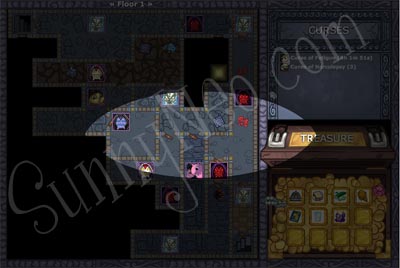 
Curse of Fatigue
This is a curse that is almost impossible to avoid. It will prevent you from going to the next level as long as it is at work. The first few times, this will only be a short time, several seconds up to a minute. However, this will go up, and you'll be cursed for several minutes, or hours. It's not uncommon to be cursed for 7 or 15 hours. 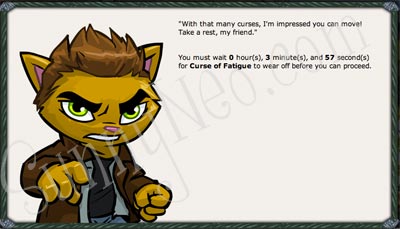 You will notice how every day, at first the curse will last for only seconds, up to a minute, but the longer you're going through the catacombs, you'll find yourself being cursed for hours, until you hit the point where you've been cursed for so long that you are no longer able to play for that day. The next day, you'll find the same pattern will repeat itself.

Most likely, the Curse of Fatigue is acting like a safeguard to prevent you from doing all the steps of the puzzle at once, forcing you to spread it out over several days instead.

There is a way where you can work around the Curse of Fatigue. This happens when you're hit with a Curse of Cleansing. This nifty curse will allow you to remove one of your curses. Do not use it, until you're hit with a Curse of Fatigue that acts for several hours. Once you've been hit, you finish the level as usual, then remove the curse, after which you are going to the exit.


Curse of Meepitude
Getting hit by this curse means that, whatever question you'll get for the next room, whether you choose the correct answer or not, the next room will be filled with Meepits.

Meep!
And because they are Meepits, they will curse you with another (random) curse.