What is Coconut Shy?
Coconut Shy is one of the four games of chance located in the Deserted Fairground. For just 100 NP, you can throw a ball in an attempt to knock down a coconut. If you are successful, you will be awarded a prize!

Since this is a site feature that gives out neopoint rewards and prizes, you may not visit Coltzan's Shrine on your side accounts. For more information look at our side accounts guide.

Visiting Coconut Shy
Once at the Deserted Fairground, click on the Coconut Shy booth to arrive at the game. Alternatively, you may enter via the Game Room. 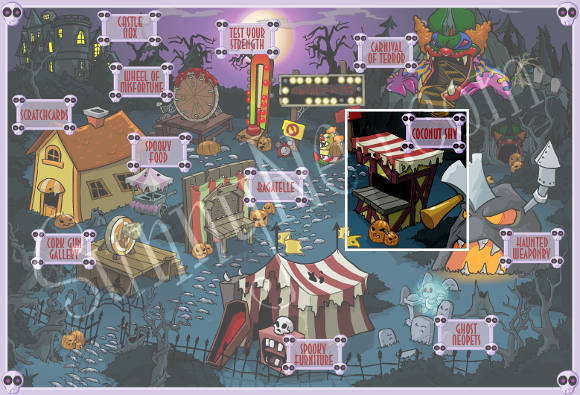 Upon your arrival, you will be greeted by Leeroy, the rather ugly looking Quiggle who runs the booth.

Playing Coconut Shy
To play, simply press "Start." It will show five coconuts of three different varieties lined up in a row, as shown in the image below. 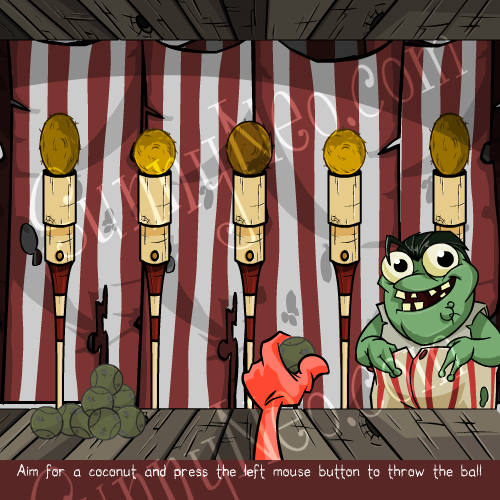 To throw at one of the coconuts, aim and then click your mouse. Voila! Now, one of five things will happen.


However, this is the Deserted Fairground, so obviously the games are rigged. More often than not, you'll just hit the coconut, but not manage to knock it down. You get 20 tries a day, though, so get going! At the end of your 20 tries, you will see the following message: 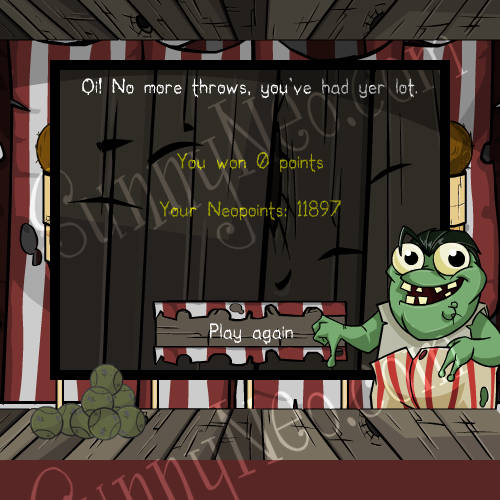 Tips for knocking down coconuts
All this advice should be taken with the warning that it is, still, a rigged game. Even the best methods are bound to fail from time to time.

By far the most successful method has been placing your cursor in the middle of the "a" in "play" of the "play again" button once you've made your first throw. This is known to be a highly effective method, but it does still come down to chance.

The second method is similar, and it simply involves aiming for the same coconut every time. It helps to aim for the bottom of the coconut (which is what the above method does, just with the middle coconut every time) and to be precise with every throw. There are speculations as to which size and color coconut is the most likely to fall down, but these likely have more to do with personal preference and the desire to see some sort of trend in this impossible game than with actual fact.


Evil Coconuts
The evil coconuts that you can win from Coconut Shy all belong on the evil coconuts page in your stamp album. There are 25 in total, and since they can only be won from Coconut Shy (with two exceptions, shown below the table) and go in your stamp album, they are worth quite a few Neopoints. Most of them hover around 95,000-99,999 NP, although a few are even UBs. The table below lists the coconuts in alphabetical order. They are all r101 (special).


To see what items you can win for defeating Mr. Chuckles, view our Battledome Challengers guide.

Avatar
Upon knocking down a coconut for the first time, you will be awarded the Evil Coconut avatar.

You get this avatar the first time you knock a coconut off in the game Coconut Shy. Knocking down a coconut is random. Exploding the coconut will not get you the avatar.

There is no strategy to knock off coconuts, the best thing you can do is aim well. If you place your mouse in the second a of the word 'again' your aim should be hitting the middle coconut.

The NT Editorial is filled with countless inside jokes, and one of them revolves around our very own Wailing Evil Coconut. Way back when, he would often appear below a question screaming, "GOOD NIGHT!" Recently TNT has gotten more creative, and appearances have been spotted of the coconut wearing a Santa hat and even a party hat. Who knows where the fun will go in the future. Here are some examples of editorials that include Mr. Coconut:

☼ Happy New Year, TNT! Could someone in the Art Department please take a look at the island Buzz's wings? They have the normal island wings when sad, angry, or hurt, but they change to normal Buzz wings when happy (which surely must be uncomfortable). Thank you! ~indish222
My goodness, we imagine that is uncomfortable without some kind of cocoon stage. We'll ask the artists if they can assist these discombobulated Buzz. In the meantime, we think mr.coconut wants to say something...

This is question 7110, archived from Editorial Issue 476.

☼ Is mr. coconut still around? He hasn't said goodnight in a while. :( ~ potatoes_and_jelly
Your wish my friend...