Starting in year five of the Altador Cup the staff of SunnyNeo held their first staff tournament.

Several of SunnyNeo's staffmembers have again taken up the challenge of the SunnyNeo Altador Cup VI Staff Tournament. Returning All-Stars from last year's tournament are this year's team captains. To find out more about these staffmembers and what they are doing the rest of the year, visit our About us page.

This year our valiant SunnyNeo staff members have been assigned to teams. Returning All-Stars from last year's tournament are our team captains and cheerleaders.

This year, the teams competed in finals, with Finals Round One pitting the overall first place team Corrupted Pond against the fourth place team of Cool Shades. Second Place Banango fought against Third Place Dream Clouds.

In Finals Round Two, Corrupted Pond played Dream Clouds, with Dream Clouds pulling the upset for the championship! Banango prevailed against Cool Shades for the third place spot. 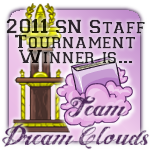 The top individual scores for each game are listed below. This year there were some eye-popping numbers!