General Info
AAA and Abigail were trapped in King Roothless' game called Dungeon Dash. AAA has been plotting his revenge ever since. Armed with a yoyo he took from the game which previously held him captive, he now has made it his mission to use that said yoyo to keep King Roothless from sleeping.


How To Play
The image below outlines the basics of the game. 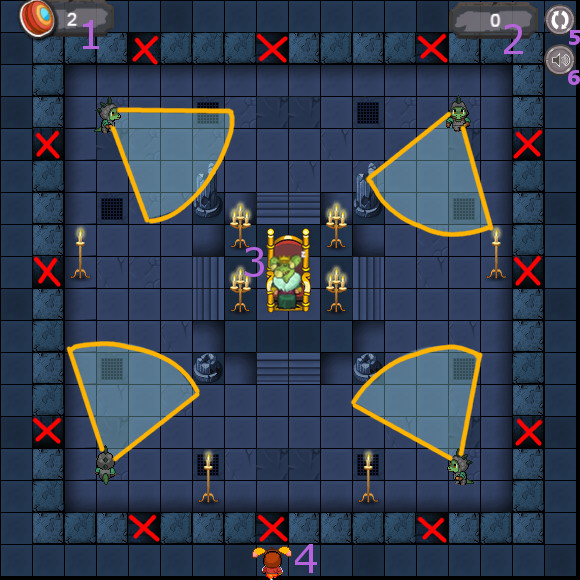 Alternatively, you can use the ASDW key setup. However, unlike going clockwise or counter-clockwise, the A moves you left, D moves you right, S moves you down, and W moves you up. If your character is in a position that does not move a direction you have chosen, you will not move. For example, if you have AAA positioned on the top three openings, and you push W, he will not move anywhere.

The ASDW may make things easier for some, or more confusing for others. Use which play style works best for you.

The spacebar slings the yoyo out the opening.

However, guards are forever searching for any threats against King Roothless. So don't hit their beams of sight or you'll lose a yoyo! Run out of yoyo's and it is game over. 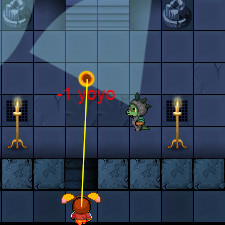 Since the whole point of the game it to not let King Roothless sleep, if he does it is game over. You have to hit him often enough for him to not fall back into slumber. Thankfully you get a warning with a yawn audio as well as an "!" flashing over his head.

Power-Ups
There are a few power-ups, good and bad, that randomly present themselves.


Tips
Sling Yoyo Twice With First Hit Standing in Top, Left, Right, or Bottom Position And Any Chance You Get
When the game starts, the guards are stationary so you align AAA either Top, Left, Right, or Bottom so that the yoyo is going straight not diagonal. Sling the yoyo which starts the guards moving, and quickly sling the yoyo again to get the quick second hit bonus. When you hit him twice quickly you get +2 on the second hit vs only +1 per hit. If you are lucky enough to get a few hits in after each other quickly, you continue to get +2 per hit.

Play With Sound On
The power-ups make a noise when they appear and when they fade - except the shield which only flashes before you are able to hit it. This will help you not miss a snowflake or yoyo you might not of visually seen. Also, you will hear the King yawn when he is close to falling asleep. This can save the game if you are more concerned about the guard's visual direction than a small "!" above the King.


Daily Dare
It is something to note: when Daily Dare returned from many years of hiatus, AAA had been teasing users with his Project X. There was even an NC Mall portion to Daily Dare called the Royal Neopian to it trying to open up doors to figure out AAA's plans. Project X turned into the new game AAA's Revenge.


First HTML5 Game
Another note, AAA's Revenge is not a flash game, but rather HTML5.